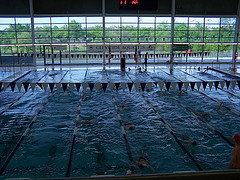 Clearly this guy has a few things to learn about sharing, both a lap lane in a swimming pool or money and power. This unfortunate event, inspired Daniel to write his 13 observations on the way home on the bus.

I especially like observation number 13 - "99 percent is a very large percentage. For instance, easily 99 percent of people want a roof over their heads, food on their tables, and the occasional slice of cake for dessert. Surely an arrangement can be made with that niggling 1 percent who disagree."