Is the U.S. Stock Market Rigged? 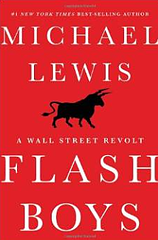 I just finished reading Flash Boys, A Wall Street Revolt, written by bestselling author Michael Lewis. The revelations in the book about how the stock market is being manipulated and rigged by high-frequency traders that have the advantage of speed, measured in milliseconds (a millisecond is a thousandth of a second) reads like one of your favorite mystery novels, only in this case, it’s not fiction but reality.

Like any good mystery novel, you become captivated by the story as well as the leading characters almost instantly. You may be hesitant to read the book because you think it’s just another book about numbers, investing and Wall Street corruption and although that’s part of the story, the larger narrative is about how speed and proximity to servers that run the exchanges came about and how this was and is legal and allowed to continue. And that's the part of the book that will keep you very intrigued right until the last page.

“Rigged Stock Market is “Bigger than A Scam”

“How Ordinary Investors Are Getting Screwed”

“Investors, Big and Small, Are Prey”

The provocative titles above are short video segments from Lewis’s recent appearance on 60 Minutes as he explains his new book Flash Boys.  What he reveals is that investors, large and small, are in essence paying a tariff to high-speed trading firms like IEX that are ‘front-running’ trade orders and in essence making hundreds of millions of dollars annually simply by seeing ahead of time what trades, buy or sell, were in the pipeline. Call it the mother of all skimming operations, and it’s all perfectly legal, at least for now.

High-frequency traders do this by placing their data centers as close as possible to the electronic exchanges in New Jersey, sometimes in the same building the exchange is located in, as well as utilizing the speed that comes from their strategically placed fiber optic lines.

So is the stock market rigged? I guess it all depends on your definition of rigged, but after reading Flash Boys, I subscribe to Lewis’s contention, that yes, it is rigged, no doubt in my mind one bit. So with that said, what’s an investor to do?

First, step back and take a big picture view of investing overall and the options and choices you have available. Next, understand that the vision you may still hold near and dear of “Wall Street” as this loud and raucous place where traders scream orders to market makers, and where the bulk of trades are made - those days are long gone.

The New York Stock exchange, Nasdaq, Bats, private dark pools as well as many other electronic stock exchanges are now actually huge secretive and very well secured data centers. The outdated concept of Wall Street has been replaced by super powerful servers that match buy and sell orders in the suburbs of New Jersey.

Money + Influence = Power. This formula has been around since the days of the Roman Empire. It’s as much in vogue in the 21st century as it was back in the day. Yes, we have the Securities and Exchange Commission that ought to be the fair referee in a tug of war between regular investors and the rich, influential and powerful Wall Street interests that will until the end of time attempt to rig the markets to their advantage. But let’s face it, the S.E.C is as political an organization as there is, and thus influenced heavily in their decisions on what to regulate and investigate by M.I.P.

As a result of the huge publicity and attention Flash Boys is garnering, the S.E.C chairwoman, Mary Jo White “unveiled on Thursday a sweeping package of recommendations for new rules and other changes aimed at strengthening the structure of the market and improving disclosure for investors. The proposed changes would touch virtually every corner of the market, including exchanges, private trading venues, brokerage firms and high-frequency traders”, this according to the recent article in the New York Times titled S.E.C Chief Offers Rules to Govern Fast Trading.

That all sounds good, right? Until you get to the end of the article: “Critics of high-speed trading found fuel in “Flash Boys”, a recent book by Michael Lewis, who contended on a book tour that the stock market was “rigged” against slower investors. Ms. White appeared to dismiss that claim in her speech. “The current market structure is not fundamentally broken, let alone rigged”, she said, with a sardonic chuckle”.

Next came the NYT’s editorial board speaking up in a recent op-ed piece titled ‘The Hidden Cost of Trading Stocks’.

Reading this op-ed you’ll discover how some brokerage firms, like TD Ameritrade, made $80 million last year from maker-taker rebates. “A study from 2012 estimated that rebates cost individual investors, mutual funds and pension funds as much as $5 billion a year.”

Before there were high-frequency traders gaming the financial system, there was and continues to be rampant insider trading. Before that there were other clever people discovering new ways to rig the markets to their advantage.

The good news is that by being a smart long-term investor, using low-cost, high quality and well diversified index funds from high integrity firms like Vanguard, you can win the investing game handily. And if you’re not sure about the benefits of using index funds for your investment strategy then check out Vanguards 5 Myths and Misconceptions about Indexing, from there, follow the golden rules of investing by maintaining a well-diversified, low-cost, long-term investment strategy, make sure your investment strategy aligns with your financial plan and that your plan is in alignment with your core values.  Keep your eye on the prize and after that, like the song goes, don’t worry, be happy!