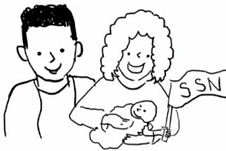 I'm sorry to be the bearer of bad news, but after hearing consumer advocate and radio host Clark Howard talk about child identity theft, I had to pass it on.  Thieves who once stole our identities now have a new target, our children.  Once we adults became smart and started freezing our credit, they went to the next easy prey - kids.

One way thieves access your child's identity is through computer viruses that steal tax, health care and school documents directly from your computer. Last year, according to the Child Theft Identity Report 2012 from AllClear ID, identity theft has more than doubled for kids ages 5 and under. You can download the entire report, or take a look at these key findings:

The worst part is that the theft is often not discovered until many years later. And sadly, according to Clark Howard, the three credit reporting agencies are not all that interested in helping or even listening to consumers when they are victims of this awful crime.

So what can you do? First, if you haven't already, place a credit freeze on your credit reports. If you have kids, they are now a vulnerable target for identity theft so next, you need to check and see if your child's identity has already been compromised. Go to AllClearId for a free ChildScan report on each of your kids.

Unfortunately, as criminals get more clever, and more desperate, we'll need to stay a few steps ahead of them.