Attempting to Outsmart the Stock Market is Not an Investment Strategy 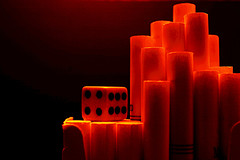 Back in the day, I considered myself an ‘outsmarter’. It was the mid-80’s, I was young and carefree and believed, as did the vast majority of my friends and colleagues, that we had the winning formula for stock market success.

Conventional wisdom said trying to beat the market was a fool’s errand, but we knew better.  And for many years, we seemed to have the magic touch. One score would be bigger than the next, so why not double down? And when we doubled down, the wins would be even bigger. And like many a twenty something of that time, we felt like there was no stopping us.

We were masters of the universe.  Whatever we touched turned to gold. It was the era of Michael Milken of Drexel, Burnham fame. Risk was sexy and everyone wanted in. According to Bloomberg, “Drexel had its most profitable year in 1986, netting $545.5 million-at the time, the most profitable year ever for a Wall Street firm.“

In 1987, Milken was paid executive compensation of $550 million for the year. Yet on October 19, 1987, what has since been referred to as ‘Black Monday’, stock markets around the world crashed. Again, according to Bloomberg, the Dow Jones Industrial Average (DJIA) dropped by 508 points to 1738.74, down a whopping and painful 23%. The DJIA did not regain its August 25, 1987 closing high of 2,722 points until two years later. And in March of 1989, Michel Milken was indicted for insider trading.

Now being in my 50’s and thankfully having learned many of life’s lessons early on in my investing years, it’s been a long time since I recalled the madness of the eighties. Yet, I’m hearing and seeing all too familiar signs that point to the same type of madness, only this time the marketers of ‘beating the street’ have become much more savvy and sophisticated.

They’ll tell you index funds are for the weak at heart. A diversified investment portfolio is for wimps. Long-term investing and buy and hold strategies are dead. The financial marketers, to use a phrase that has been overused, are simply putting lipstick on a pig.

Sure, you’ll be told this time is different. That technology has leveled the playing field and that the only way to win at investing is to beat the market and to trade, buy and sell constantly. You’ll at once feel seduced by the many sales pitches and commercials you see and naturally you’ll question your strategy.

Oh yes… I remember the feeling, the intoxication of it all. But then, I remember Black Monday and the way the stock market taught me the lesson of my lifetime which I will never forget.

So please, next time you get the itch to want to beat the market and throw your prudent and sensible long-term investment strategy out the window and put it all on black or red, call me and as they say from my home state of New Jersey; we’ll talk.