Sweet Financial Success is a Result of Delayed Gratification 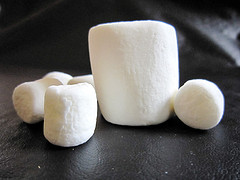 It's true - if you want to achieve financial success, you'll need to develop your delayed gratification skills.

Each one of us is tempted by the latest and greatest shiny objects that bombard us through the many media channels countless times day after day. So why do some people seem to be able to resist the myriad of temptations while others succumb and end up in serious financial troubles?

There was a study done in the late 60’s by Walter Mischel, a Stanford professor of psychology, where four-year-olds were presented with a simple, but far from easy choice regarding candy, marshmallows in particular. A researcher offered each child two options: either eat one marshmallow immediately OR, if the child could wait while he left the room for a few minutes, the child could then choose to have two marshmallows once the researcher returned.  Most of the kids struggled with the temptation for about three minutes before they caved – they were not able to resist the white, sticky-gooey treat.

But what does the marshmallow study have to do with money?

A great deal it would appear.

The results of the study concluded that the kids who resisted the marshmallow temptation and showed self-control, (which was only about 30%) became adults who were generally more successful than those who didn’t resist. They were self-motivated, patient in achieving the goals they set, had financial success including high incomes, were positive in nature and enjoyed better physical and emotional health. Those kids who displayed immediate gratification grew up to have more issues including behavioral problems, lowing paying jobs and unsatisfactory careers, poor health and many even had drug problems.

Most poignant was what researcher Mischel explained, “What we’re really measuring with the marshmallows isn’t will power or self-control, it’s much more important than that. This task forces kids to find a way to make the situation work for them. We can’t control the world, but we can control how we think about it.”

Ultimately, financial success requires the skill of delayed gratification - fighting the temptation to spend money while employing the discipline of saving money.  Since we are all on our own when it comes to retirement planning, we really need to find a way to spend less and save more. If you are willing to postpone gratification by disciplined investing, you will experience sweet financial success and a retirement that provides you and your family with the comforts and freedom you deserve.