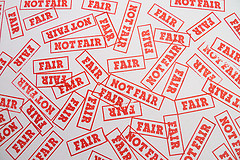 I'm not saying it's fair, not by a long shot, but these are some facts about women in the workforce:

Being Proactive and Planning for a Successful Retirement

Women who take charge, do the math, plan for contingencies and work with their partners and/or financial planners have a better chance of securing their finances in retirement than those who shrink from the process, according to a new study.

Slightly more than half of the women surveyed know the likely amount of their retirement income/assets and only 44% have calculated the amount of their essential expenses, according to the study. Approximately one-in-six (16%) reported that they have or plan to delay retirement, on average, four years.

The data suggests that women who work collaboratively with spouses, partners, financial advisors and even knowledgeable friends, report higher confidence in their retirement security. Among men and women, men are more likely, by a margin of 65% to 55%, to calculate retirement income.

"The combination of risks for women and their relatively inadequate retirement planning has become known as the ‘perilous paradox,' but the message is clear that women are able to avoid that," said Sandra Timmermann, director of the MetLife Mature Market Institute. "The risks and costs of ‘living long and living female' call for an ‘affirmative action' plan. We find that those who plan for a steady stream of income, along with some flexibility for the unexpected, are best prepared for what can be an extended future."

Longer life spans for American women create additional costs and financial constraints that can lead to greater financial challenges in retirement, according to the study. As of 2009, women aged 65 years or older had significantly lower annual retirement incomes than men—an average of $21,500 vs. $37,500. American women are more likely to experience retirement alone since many never marry or are widowed or divorced.

Retirement Planning-Taking the Next Step

If you’re like most people, (both men & women) the thought of developing a comprehensive financial plan that provides you a clear and easy to understand roadmap of your retirement income is easier said than done.

Yet the sooner you know where you stand and how best to move forward, the sooner you’ll enjoy the benefits and peace of mind a solid financial plan brings to your life.