Confessions of a Frugal Financial Planner 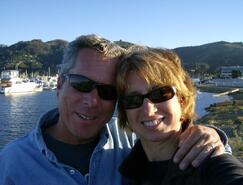 Back in the day, I was a spender - a big time spender actually. It was the late 1980’s, the economy was starting to really take off and President Reagan had just lowered taxes across the board.  I was in my late 20’s, earning a six figure income as a partner of a fast growing financial consulting firm. Life was good.

I had all the material trappings a young and successful entrepreneur could hope for. I spent practically every dollar I earned and then some. I thought saving money was something ‘older’ people did. I was living the high life and never expected the party to end.

But something was missing in my life and that something was authentic happiness and fulfillment. The more money I made, the more I kept spending. I truly believed that I could buy my way to happiness.

What I eventually realized was that with lots of money to spend, you can buy pleasure, in large or small doses, but pleasure as we know is a temporary sensation. Inner fulfillment on the other hand is a long, lasting experience and requires, practically demands, a more soulful approach to your money and your life.

And as luck would have it, potential fulfillment was staring me right in the face and her name was Pat Chiappa. She was one of our star employees at our firm and I fell madly in love with her. Needless to say, my partners at the time were not happy with this development and offered me a choice. Stop seeing Pat or you’ll need to leave the partnership and we’ll buy out your partnership interest at a premium price. To me, it was a no brainer, and next month I celebrate my 20th wedding anniversary with my beloved soul mate and life and business partner Pat.

It was 1992 when Pat and I married, relocated to Marin County in Northern CA and when I first read the seminal book on money, Your Money or Your Life. Yet it wasn’t until 1997 when I met a man by the name of John Waller, who would forever change my life and teach me the true value and pride of being frugal, that my relationship with money was truly transformed.

In 1997, I was still working in the corporate world and landed an interview with a company in San Rafael, CA called Fair Isaac (FI). Fair Isaac, as most of you know is the creator of the FICO credit score. John Waller at the time was SVP and Director of HR. He kindly was willing to meet me early one morning before the office opened, so I would be able to get to my current job in San Francisco on time.

When I arrived, there was only one car parked out in front of the building that early, chilly morning and that was an old blue Toyota Corolla. I suspected John must have been dropped off as there’s no way a very successful person like John would be caught dead driving a car like that, right?

I was wrong, it was John’s car - a humble 15 year old Toyota in mint condition.

Instead of the interview lasting an hour as planned, we met for over two hours. Little did I know with John as my mentor, this time of my life would prove to be one of the greatest financial lessons to date.

Over the three years of my tenure at FI, John and I spent many a Friday afternoon discussing and talking money and values. When I finally asked him why someone at his net-worth level would drive an old car like that Corolla, and wasn’t he expected to drive a fancier car for image sake, and lastly, didn’t he just want to drive a nicer car,  his answer was that he could care less what other people thought about the car he drove. He was frugal and proud of it.

And that was it, my turning point. See, up until that point, even after having read and re-read Your Money or Your Life several times, I was still having trouble going full-on frugal. I considered myself, and even now consider myself a hybrid ‘frugalian’ to some degree. But there, staring me right in the face was my role model. Here was a wealthy man that lived in a humble home, lived well below his means, drove a very humble car and seemed totally carefree and genuinely happy.

Lessons Learned on the Road to ‘Frugalville’

What I learned from John was how vitally important it is to delink your self-worth from your net-worth and your material possessions from your self-identity. For it is one thing to read about lowering your spending, living within your means, being frugal, tracking every cent that comes into and out of your life, but it’s a whole other thing to actually see someone living the frugal lifestyle with pure joy and bliss.

What John really taught me was how to embrace and make peace with being frugal. And I needed all the help and guidance I could find as living in Tiburon, CA at the time, one of the wealthiest enclaves in California where wealth was proudly and conspicuously displayed in every way you could imagine, well, I figured if I could be a proud frugalian here, I could do it anywhere.

The magic moment for me came when I changed my thoughts about being frugal.  I used to think being frugal was about depriving yourself - less spending, less fun, less everything.

But that turned around when John left a distinguished career for early retirement, Aha! So being frugal is not about having less, it’s actually about having more, specifically more time and more options. And once being frugal in my mind was about liberation and financial freedom, I was hooked.

Fast forward to today and as I gander a look out at my five year old Toyota and a lifestyle that’s purposely designed to live below our means, I owe a world of gratitude to my dear mentor John Waller for showing me the way.

Our local paper did a story about being frugal a few years ago and decided to interview me - and that’s the happy ending to my story.

book recommendation, financial independence, Your Money or Your Life