Will Having More Money Make You Happier? 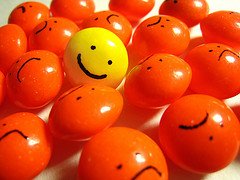 Happiness resides not in posessions and not in gold; the feeling of happiness dwells in the soul. - Democritus

Most of us would agree that when our income goes up, our happiness level increases. Not so, says a 2010 Princeton University study about money and happiness which showed that 'emotional well-being leveled off at about $75,000 per year'. In the study, winner of the Nobel in economic science and author Daniel Kahneman along with his co-author Angus Deaton, found that people reported an increase in their happiness as their incomes increased - but at $75,000 a year - it leveled off.

Then again, in a December 2011 report by the British Institute of Economic Affairs, titled "...the Pursuit of Happiness", they claim that money does indeed buy happiness.

So which is it?

Probably neither - or both. Neither study gives specifics as to whether or not they are based per person, per household, size of household, gross or net income. They also don't consider (or share) information such as ages, debt and savings, future earnings in a given career, geographic locations, future inheritances, home ownership status, etc.

To add my two cents, I would add the 'enough' factor to the discussion. People generally are happy if they have enough money - and clearly that number is different for everyone. If you have enough money to be secure and comfortable, enough money that you are free from financial stress regarding bills and other financial obligations, enough money so you can balance your needs from your wants - then in my experience, you're going to be happy.

The definition of 'enough' though is such an individual thing - there is no across the board answer to when is enough, enough? The classic book Your Money or Your Life, by Vicki Robin and Joe Dominguez (which I had the honor of contributing to when it was updated in 2008) introduced the enough concept to me in 1992.

So understand that arriving at your enough number will be a matter of trial and error. What may look like enough on paper or in a strategic financial plan will need to be validated with at least a year or two of actually living with your enough number.  Rarely do you hit the mark with just the right amount on your first attempt. Be patient, be honest with yourself, and know that the sooner you nail this number down, the more confidence you'll feel on the road to financial independence.

(I came across this excellent article after writing my blog - it's called The Value of a Happiness Economy, by John C. Havens. John is EVP, Strategy and Engagement at Yoxi.tv, a media strategy organization that discovers and elevates social entrepreneurs by leveraging their expertise to build shared value partnerships.)

book recommendation, financial independence, Your Money or Your Life